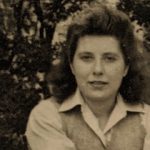 The Women’s Land Army (WLA) was created in 1917 during the First World War as a means of replacing men leaving the land to join the military.  The WLA was disbanded at the end of the war.

In June 1939 the WLA was reformed when war with Germany was imminent.  Initially the government relied on volunteers but conscription was necessary from January 1942.

Harborough’s local WLA attachment was based at a purpose-built hostel in Lubenham.  This display will explore this history of the Women’s Land Army in Lubenham and feature objects from Pat Fox, who was in the WLA herself, wrote a book about her experiences and gave many talks.